Onboarding Mistakes with Peter Brown, Author of “Make It Stick: The Science of Successful Learning” 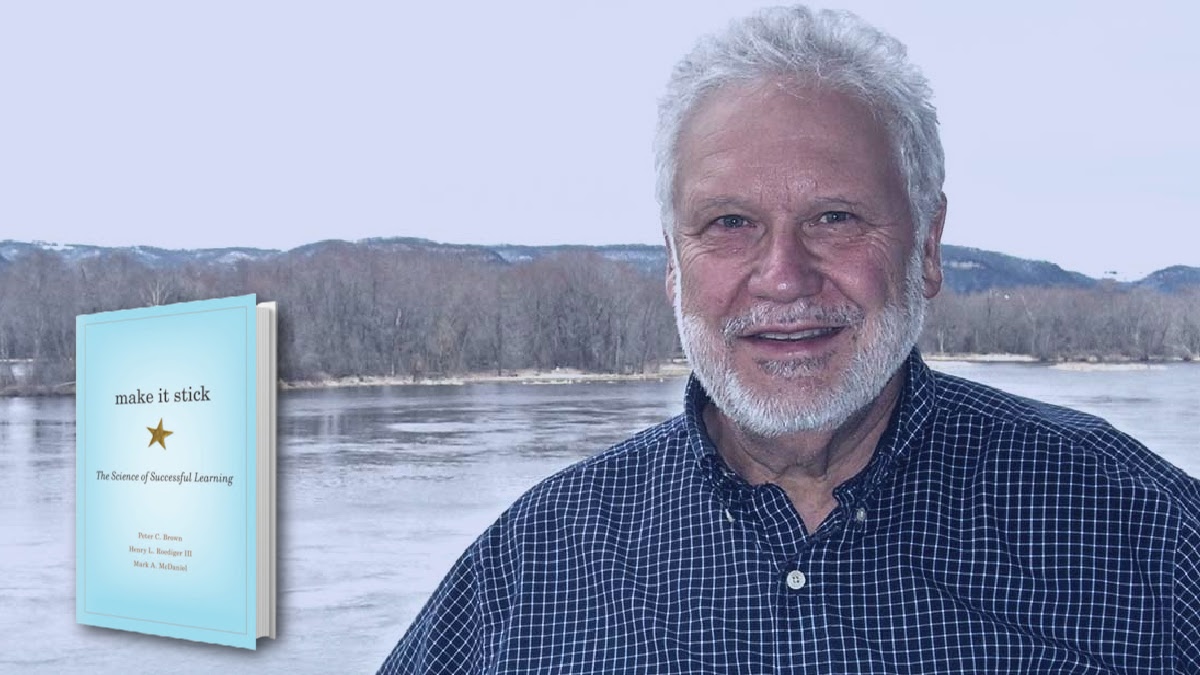 We’re excited about this one. Sam got a chance to sit down and chat with Peter Brown, renowned author of “Make It Stick: The Science of Successful Learning.” Peter’s book is a groundbreaking read on the science of learning.

As a retired management consultant, Peter’s has worked with major corporations, as well as branches of the United States Armed Forces. Through his consulting work, Brown became fascinated by the process in which people really learn and why most learning doesn’t stick. During our sit down we chat about what managers get wrong when onboarding new employees, why struggle is critical to memory, and how learning to learn is a really important life skill.

These are the questions I was faced with after reading a book called “Make It Stick” by Peter C. Brown. It’s one of the many books on my shelf about learning and memory, but this particular book revolutionized the way I think about learning and ended up being one of the most transformative things I’ve ever read.

Think about taking a bath. You can fill the tub to the very top and soak in it for hours, but eventually, you have to get out and watch the water drain away. That’s how most of us have been taught to learn. You take in as much as you can, you soak it up, but once you’re finished—it’s gone. A day later, the tub is dry again. All of its contents have been drained away. Most of us are not learning the right way, so our brain is like the tub in this scenario. We take a lot in when we’re learning something, but most of it is gone by the next day.

Peter’s book showed me that we are learning the wrong way, and once I finished reading it, I knew I had to talk to him. His book has so many valuable lessons you can put into practice right away, and I wanted to sit down with Peter and find out more about the story behind the book. I wanted to find out how a retired management consultant came to write one of the most groundbreaking books about learning that’s ever been written.

So I reached out to Peter and asked if we could have a conversation. Peter agreed to sit down with me, and we chatted about some really impactful topics including what managers get wrong when onboarding new employees, why struggle is critical to memory, and how learning to learn is an important life skill all of us need to adopt early on.

I want to share our conversation with you, because Peter is someone we can all learn a lot from. Yes, Peter is a retired management consultant and writer, but above all he’s a storyteller. Peter has the unique ability to turn science and psychology into a narrative that everyone can relate to by using the stories of real people to highlight what cognitive science tells us about memory, the human brain, and the science of learning.

Since Peter is such an excellent storyteller, I think the best way to share our conversation with you is to simply let you read it for yourself. So here is an excerpt from the conversion Peter and I had this August when he joined our podcast, “Bring It In”, as a guest on episode seven. I hope you find it as compelling as I did.

Sam: What is the story behind what made you write this book?

Peter: My brother-in-law is in the cognitive science field, and he and I decided to collaborate. He headed a research project for what makes learning work, and the results they were getting were counterintuitive. They were trying to get it out to a general audience and said: “How do we do it?” Well, I’m a writer and we decided to collaborate on the book with another one of his colleagues. So, we had two cognitive scientists and a writer, and we produced a book that’s highly anecdotal that brings forward this kind of surprising research on what leads to learning that sticks. It’s been amazing to see what has happened since.

Sam: What’s been the biggest takeaway for you in the process?

Peter: I felt really validated by the research. Basically, learning works when you struggle with something new, try it in different ways, connect it to what you already know, and finally get that ‘aha moment.’ Building connections in the brain really is a matter of practice at retrieving information and applying it over time. And there are difficulties that make learning stronger. The things that feel difficult, that some people interpret as ‘I’m not getting it,’ are actually the things that make learning strong and help you bring it back later. I’m a big believer in trial and error, and that turns out to be highly effective.

Sam: Is it fair to say the way an HR director might be doing new hire training by putting somebody on Zoom for 4-6 hours a day for a week, is not effective?

Peter: It’s not effective if you want it to stick. Intuitively, we’re drawn to rereading material, watching videos, hearing lectures — making it very simple for people to adjust. That kind of thing goes in, but it doesn’t stick. When you’re trying to bring people up to speed on something, you want them to hear it, think about it, and then practice and recall it later. And you want them to come back to it later in spaced out times. Putting people in front of a lecture or video isn’t effective.

Sam: In the book, you talk about the myths of mass practice. Is it fair to say that’s about cramming?

Peter: Yes. There’s some really interesting myths about this mass practice thing. When students take their exam they’re highly confident. They take their exam in the morning, they do very well, they say, “I got it down.” When you test them a week later or two weeks later, 80 percent of it is gone. Whereas, the students who studied through low stakes quizzes or through their own flashcards do slightly less well on the exam, but they don’t lose the stuff because they’ve developed this connection and this ability to recall it. So mass practice is not useful. Another example is mixed practice. It’s much better to practice something a few times then work on other things in the course: Mix it up! It feels difficult, but that difficulty enables your brain to make adjustments as to ‘what am I looking at?’ You don’t see that immediate gain, but when you come back later you’re doing better.

Sam: One of my favorite lines in the book is when you compare cramming to binge and purge eating. A lot comes in — most comes out. I thought that really got through.

Peter: Yes, and it’s intuitive. People think if they can get it all in it will stay there.

Sam: What surprised you as you went through the research with your co-authors? Was there something you initially didn’t believe?

Peter: I wasn’t so sure about this idea of mixing up the problem types. For example, if you’re trying to learn to identify birds or paintings, the idea of seeing them in a random sequence you haven’t seen them in before to help you identify them correctly seems highly counterintuitive. I would like to see many examples of a Picasso before many examples of another artist’s paintings. Everybody who was tested in those scientifically organized tests insisted they did better when stuff was done in a block fashion, but the test results show that’s not the case. So, I found that surprising.

Sam: So much of the research challenges the pedagogy and structure of K-12 and higher education with the way that curriculum is structured. Any recommendations that came out of this as you worked with your co-authors around how school should change?

Peter: There’s been this huge response to the science in “Make It Stick,” both in the U.S.and internationally, particularly with law schools and medical schools. So there’s a couple of things:

All of those things can be applied in school all the way to highly professional, highly skilled fields like flying commercial jets or doing brain surgery and so forth.

Sam: There’s so many great takeaways from your book that you can put into practice right away. If you could give one piece of advice to managers in the workforce right now on just one thing they could do, what would you recommend?

Peter: I think it’s really useful to be clear about what you want a person to be able to understand and do. In school, you want to start class by saying: “This is where we’re headed, here’s what we’ve done so far, and here’s what we’re going to do today.” I think that is really important. And then give a challenge to the learners to figure out themselves and then give them direct feedback. Because struggling to solve a problem and then getting direct feedback is much stronger learning than saying: “I’m going to teach you how to solve this formula, here’s how you do it, now try it.” That’s not nearly as effective as saying: “Here’s where we are, here’s what I’d like you to try to figure out, how does it relate to what you already know? What are the implications and what do you think might be a good solution?” So I think that’s really important: To know where we are, where we’re going, then be asked to wrestle with it.

Sam: I think your book has a lot of important lessons for parenting, too.

Peter: I try to compare it to teaching a kid to walk. You know as a parent that only a kid can do it, and you see how that trial and error — that struggle and desire — turns into a skill. Then, that small skill of being able to walk is just a small piece of all kinds of motor skills that a kid can do. If you think about that in any realm of life, that’s how learning is. I think you’re right, it’s a great tool for parents to help their kids accept difficulty as information and not as a sign of ‘I’m not smart enough, I’m not getting it.’

Sam: What’s on the horizon? Is there a “Make It Stick” sequel coming out?

Peter: I think a lot of this is better done on the internet than through another book. We’re having the conversation [about what’s on the horizon], it’s been exciting.

There was a lot to unpack from my conversation with Peter, so…

Want to learn more about how to make it stick? You can check out my full conversation with Peter on our Bring It In podcast. And if you want to see for yourself how gamification helps us learn and retain information, you can try 1Huddle today.